Home » News » Knucklebooms to the Rescue 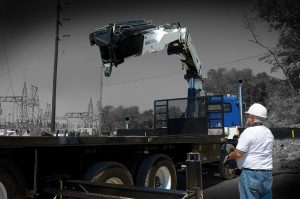 Contractors are resourceful. When they need to get something done, they’re going to figure out a way to do it regardless of whether they have the perfect equipment. So most contractors aren’t a stranger to the idea of using equipment for tasks it isn’t meant for, but those same contractors usually recognize that they’re often pressing their luck. Utility Lines Construction Services was one such company. It wasn’t until they noticed a huge productivity leak that they decided to add articulating cranes to their equipment lineup. “Before we bought our knucklebooms, we were doing our heavy lifting with backhoes, and our productivity definitely suffered,” says Rick Chrissley, field supervisor with Utility Lines.

From backhoes to cranes

Utility Lines, based in Buford, Ga., is a subsidiary of Asplundh Construction. Utility Lines specializes in installing underground and overhead power lines and does directional drilling for power companies in Georgia. The company used to do its heavy lifting with backhoes, which were technically supposed to be doing the digging, not lifting heavy components during utility line construction. “Moving our reels of wires and transformers with backhoes was terribly inefficient,” Chrissley says. “Those backhoes are meant for digging, and so when we used to move our heavy items around with them, they’d have to stop what they were doing, and we lost productivity.” Also, depending on the size of the transformers, Chrissley says the backhoes were unable to handle the payload. So, it didn’t take a rocket scientist to notice they were experiencing too much downtime, and that’s when Utility Lines decided to purchase some articulating cranes and leave the heavy lifting to them.

“Now we can move payload with the cranes, and the backhoes can keep digging, which is what they’re supposed to be doing,” Chrissley says. As soon as Utility Lines started using articulating cranes, the backhoes could focus on their task, and Utility Lines saw productivity skyrocket. However, productivity wasn’t as good as it could be. It was, of course, much better than in the backhoe days, but Utility Lines started out using a brand of articulating cranes that continually let them down. “As soon as the cranes we used to have got a little bit of age on them, they started to lose reliability. I was back to losing production, and I was letting customers down,” Chrissley says. “With the old cranes, we’d go out on the job one day and be able to place a transformer, and then we’d go out the next day and try to place a transformer of the same weight, and the crane wouldn’t be able to do it. They would lose capacity.”

Chrissley had used Iowa Mold Tooling Co., Inc. (IMT) articulating cranes at his previous employer, and as soon as he saw the problems Utility Lines was having, he approached his boss about giving IMT cranes a try. They put their heads together to talk about their productivity problems and the various solutions available, and they decided that switching to IMT knucklebooms would be their best bet. Utility Lines has increased its fleet of IMT articulating cranes, and Chrissley says he’s been consistently pleased with the IMT cranes’ performance, durability, and reliability.

“So far with the IMT cranes, I haven’t lost production or time, and I’ve been able to handle the task at hand without fail,” Chrissley says.

When utility construction companies use cranes, they typically pick articulating cranes over telescopic cranes because of the ability to transport payload from Point A to Point B and because great reach isn’t typically a requirement on these jobs. Articulating cranes can transport the load because the crane folds up tightly and stores in a “figure four” position, leaving a lot of room in the truck bed to haul materials. On the other hand, this isn’t possible with telescopic cranes, which are stored over the truck bed, leaving little room for payload. However, not all utility construction companies employ articulating cranes, giving companies such as Utility Lines a distinct advantage. “We have a lot of competition, and using IMT articulating cranes has given us a direct advantage over our competitors,” Chrissley says. “Some of them don’t even use cranes, so that allows us to shine better and be a more complete contractor for our customers. They’ve made us self-sufficient.”